Earlier today a friend turned me on to a blog referencing Utica, New York, an imperfect but rising city I have come to love and adore.  In this blog, the writer, now living in North Carolina, explains how Utica’s status as a refugee (and particularly a Muslim refugee) sanctuary is destroying the fabric of the city.

If you’re an urbanist that loves hard numbers (which I love as well), this one might not be for you.  If you’re someone who believes in the fighting spirit of our urban revivals through acceptance, diversity and understanding, then I urge you to read on.  My open letter to Loretta the blogger below is more personal and less informative than the content I typically post, though it addresses the very nature of how our perceptions of our cities often fail us.  I am an even-handed writer and always do my best to see…

From January 20-March 22, 2010, the artwork of Jimmy Tsutomu Mirikitani was on exhibit in the Stanley Center for the Arts Loretta M. Romano Room Gallery.

Mirikitani is a Japanese American artist who was held in an American internment camp during World War II and was homeless for many years as an adult. He is the subject of the film The Cats of Mirikitani, directed by Linda Hattendorf. Much of Mirikitani’s work is about Camp Tule Lake, where he was held, Hiroshima, which claimed the lives of his mother’s family, September 11 and cats. 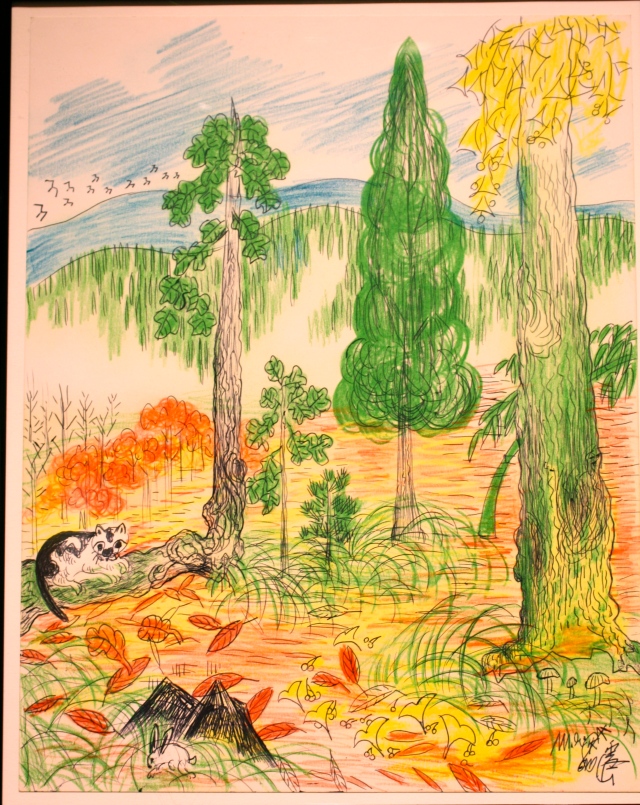 Cat Taking a Sun Bath in Autumn by Jimmy Miritikani

Why cats? “I like cats,” says Mirikitani simply in the documentary. Additionally, as a young man in Tule Lake, a young boy used to follow him around, requesting pictures of his favorite animal: the cat. The boy never saw the outside of Tule Lake again. He died there, and Mirikitani never forgot his young companion.

Why else? Perhaps because when one has survived a concentration camp in the land of the free and witnessed one of the most heartless acts of terror in history, the cat symbolizes resilience and survival. Perhaps it is because in the midst of anguish, the cat’s antics provide precious moments of levity.

And perhaps he just likes them and they make him happy.

My mom was born on May 30, 1933 at her paternal grandmother’s house in Clinton, New York. My grandparents, Tom and Dorothy Canfield and their newborn daughter Patricia then took up residence in Clayville, New York near the Clayville Knitting Mill (now Homogeneous Metals, a division of Pratt & Whitney) where both parents worked. The mill was located on the Sauquoit Creek, whose falls provided the hydroelectric power needed to function.

Overlooking one of the mill’s waterfalls.

With Tom and Dorothy both having to work, they enlisted the services of a young neighbor named Stella, who watched several neighborhood children. Now, Stella was not cut out to provide child care – my mother and her friends used to tell stories of being regularly locked out of the house, even when one of the area bullies would come over, knock a child to the ground and sit on them. Stella would simply come to the door and tell them to knock off the racket.

The Stella story my mother told me far more often that being sat on by the fat boy was of the early November day in 1949 when Stella came running down the street screaming that he son was gone – kidnapped, in fact. The authorities were called and an investigation was opened. Stella told the story of a strange man entering her home, taking six-week old Stephen from his crib, and fleeing in a “motor car.” Although she gave chase, Stella couldn’t catch up with the abductor.

Newspaper and radio coverage was nationwide, with Harry tearfully pleading for his son’s return and begging his captor to take care of young Stephen, even giving feeding instructions.

Family day on Bald Mountain in the Adirondacks. Not pictured: murderer. From left, Grandma Dorothy, her niece Beverly, Mom, and grandma’s sister Helen.

Sadly, this was all for naught, as Stephen’s body was found in the shallower waters of the creek. The coroner became involved and the investigation intensified, ultimately resulting in Stella’s confession.

In her new story, Stella accidentally dropped the child during a feeding, which killed him. She said that she panicked, threw his body over the falls and ran into the street with her story. The entire time, her husband stood beside her, the coroner accepted this version of her story, and she was released. 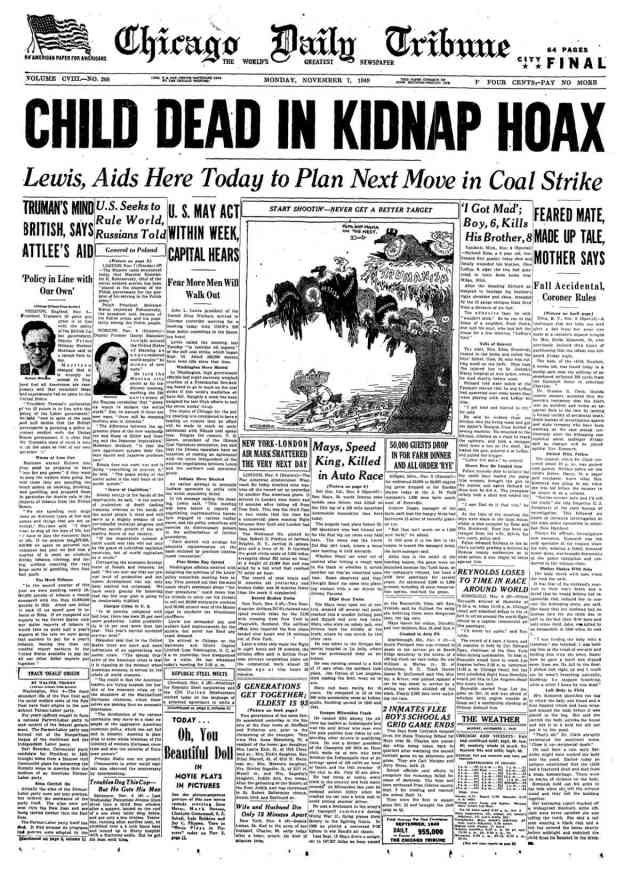 Chicago Daily Tribune, November 7, 1949. Stella’s case is the headline, with the article in the far right column. The story made headlines across the United States and as far away as Australia.

Many members of the community remained convinced that she killed the child intentionally (for one drop – even if she was standing – to kill him seems to be unlikely, especially considering floors were wooden at this time, and may even have been carpeted). But, the case was closed and people were concerned with making their own livings as mechanization began to encroach on their own jobs.

I don’t know what became of Stella and Henry, but members of the Komorek family still reside in the area – none of them killers. In fact, one of the Gen-Yers in the family was my mom’s hairdresser for years. Morals of the story: if you don’t want kids, don’t have them, and Post-Partum Depression is real, so don’t ignore or dismiss it. 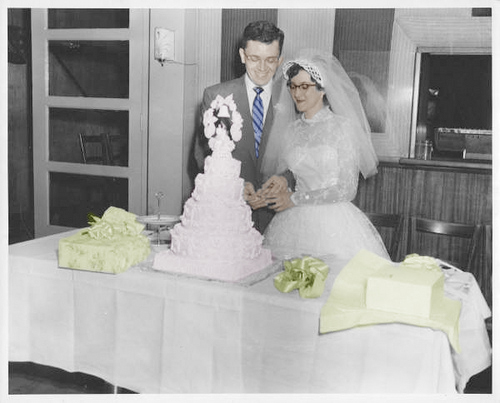 My mom went on to get married, have seven children, and a career as an executive secretary. She stayed sexy and didn’t get murdered. 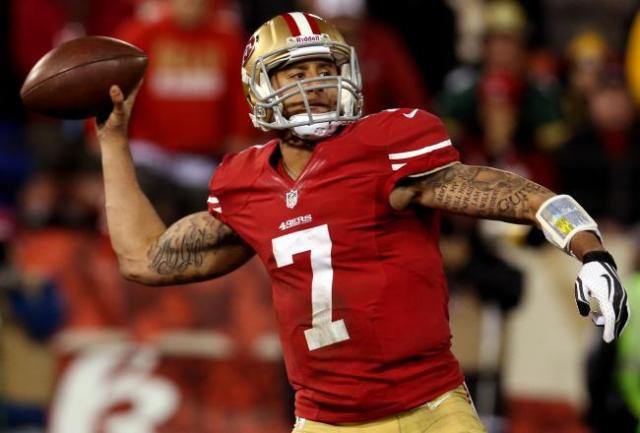 Swear to god, when it comes to hiding out from political drama and hypocritically-butt-hurt-right-wingers,  you can’t even seek refuge in football anymore.

While Kaep tried his best to hold the peaceful protest that has been requested from the ever squawking  “don’t tread on me” bunch, it turns out that when they said “as long as it’s peaceful, we don’t mind if you protest”, what they really meant was “hey boy, the sand’s been scattered on the stage. Get to soft-shoeing or shut the fuck up!”

Respect the flag… but not people:)

Turns out, it’s not a peaceful protest you want from the black community. What has bothered you isn’t the outliers who (sadly) promote violence at BLM movements even though you’ve…

My foster dog Baxter went to a possible foster-to-adopt home yesterday. So far, so good; he LOVES the kids and isn’t harrassing the resident senior dog. Let’s hope this happens!

Update: foster home didn’t work out, so I foster-failed and he’s with me for good!

Don’t judge my lack of creativity in the Title Department – I’m hot, tired, and everything hurts.

That said, I spent all weekend in Little Falls, which is about a 30-minute drive east of home. To most people, a 30-minute commute is nothing, but when you’re from an area where everything you really need is 10 minutes away, a half hour may as well be an eternity. Many of my fellow Central New York residents (myself included) are hesitant to visit our neighbors because we’re just not used to having to really go anywhere. Sure, if it’s Syracuse, Boston, New York, or Toronto we’re all over it because we perceive those destinations to have more value, but we too often overlook the gems next door.

I landed in Little Falls over the weekend because my friend Jewel of Denile was participating in Chicks Along the Canal, which coincides with the city’s Canal Days. The event is right near the canal (as one might guess), so I had the opportunity to explore a bit.

So cool – you can tell that women are running this show. 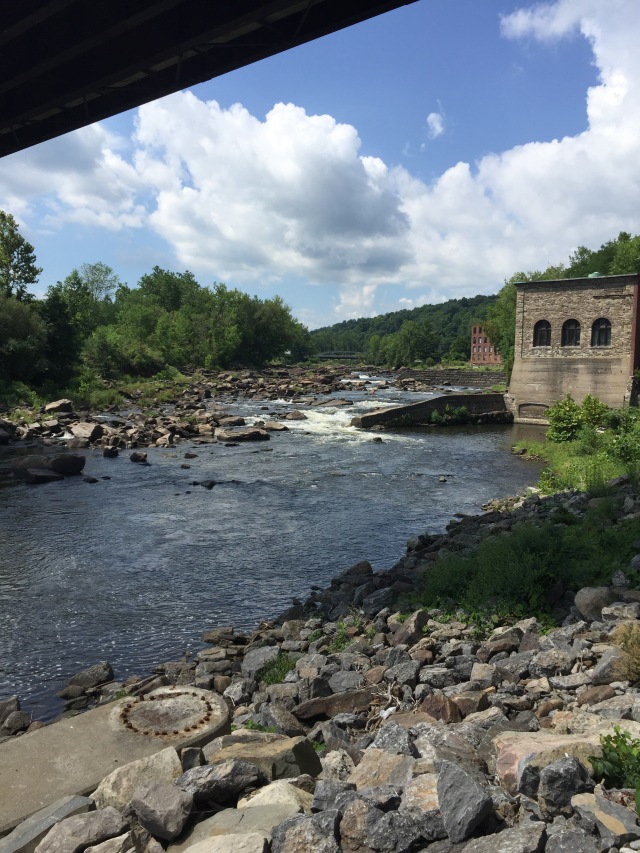 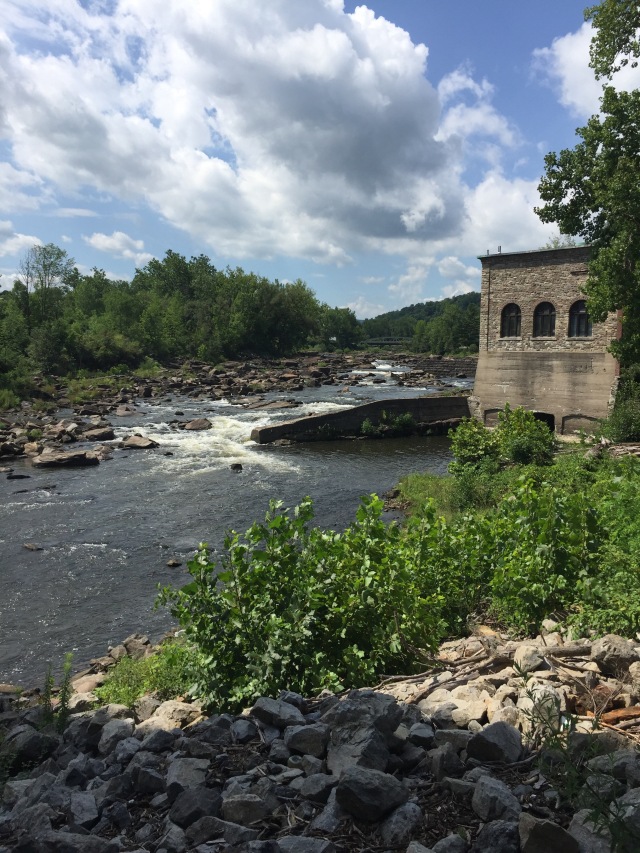 It’s decrepit and possibly abandoned. I want it. 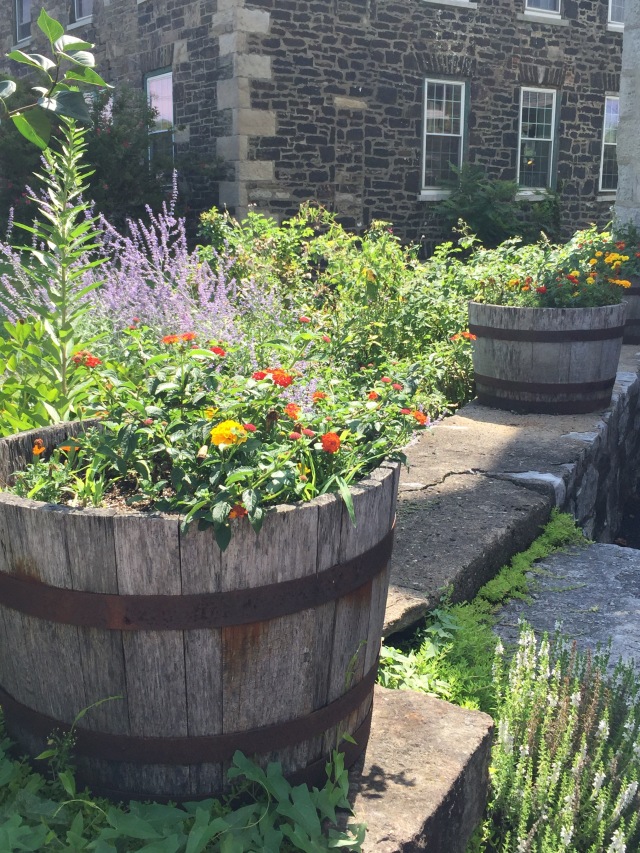 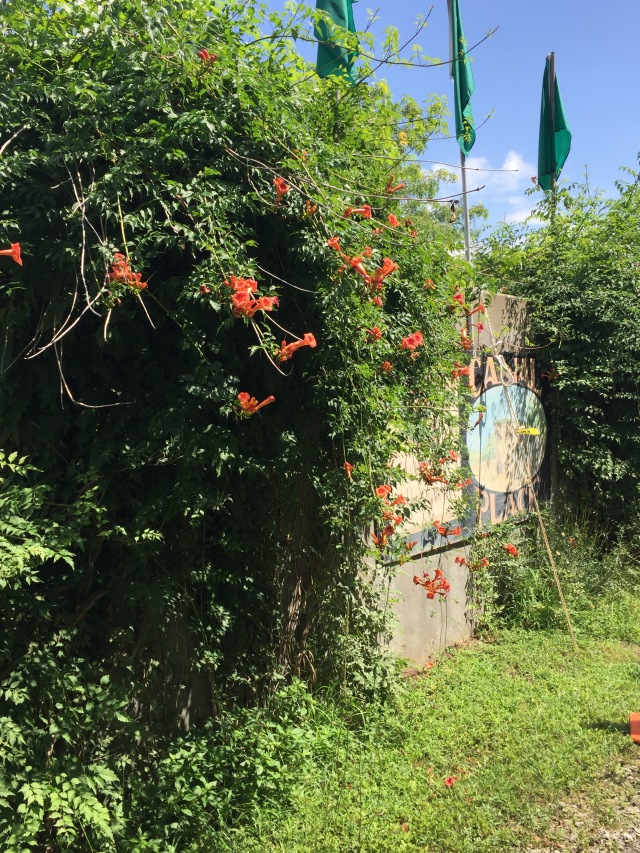 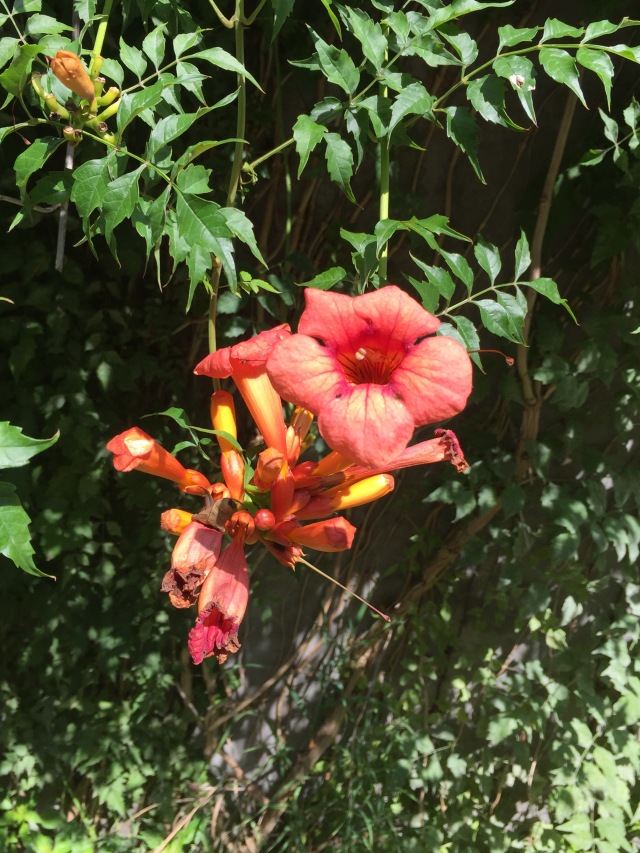 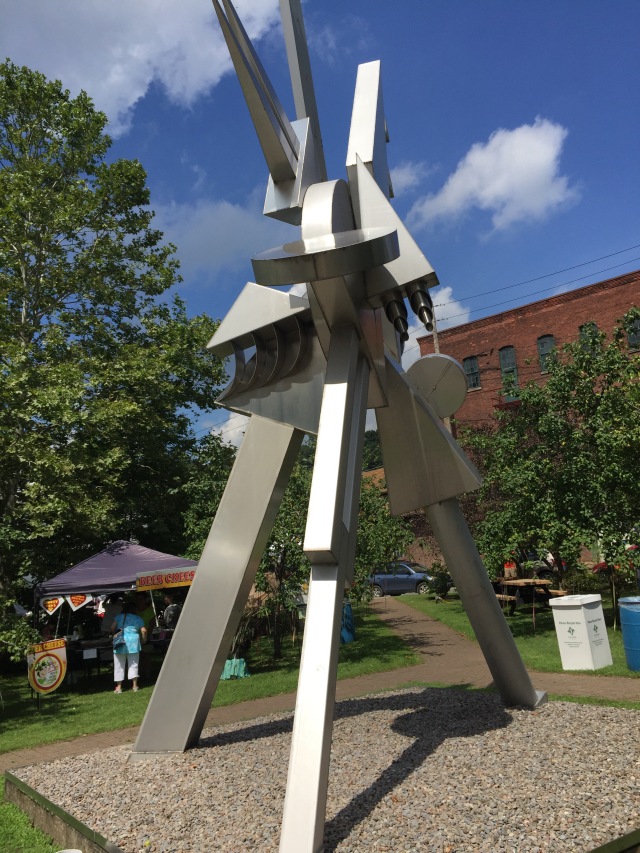 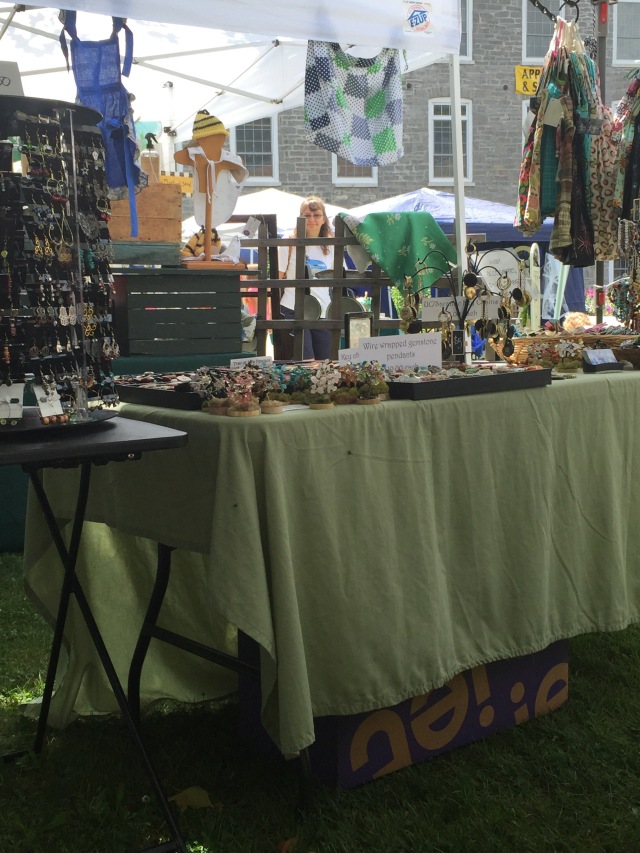 It was an important waterway commercially and was strategically significant during the Revolutionary War. It also likes to flood. 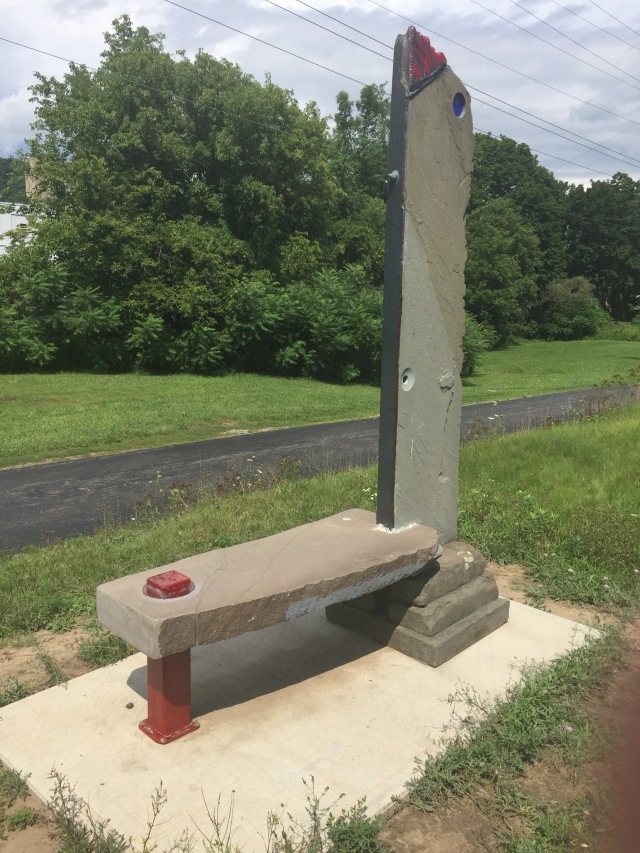 There was nothing to describe this sculpture. It’s an enigma wrapped in a mystery because I don’t feel like Googling it.

Pretty sure this is Moss Island. I’ll have to verify with climbers. 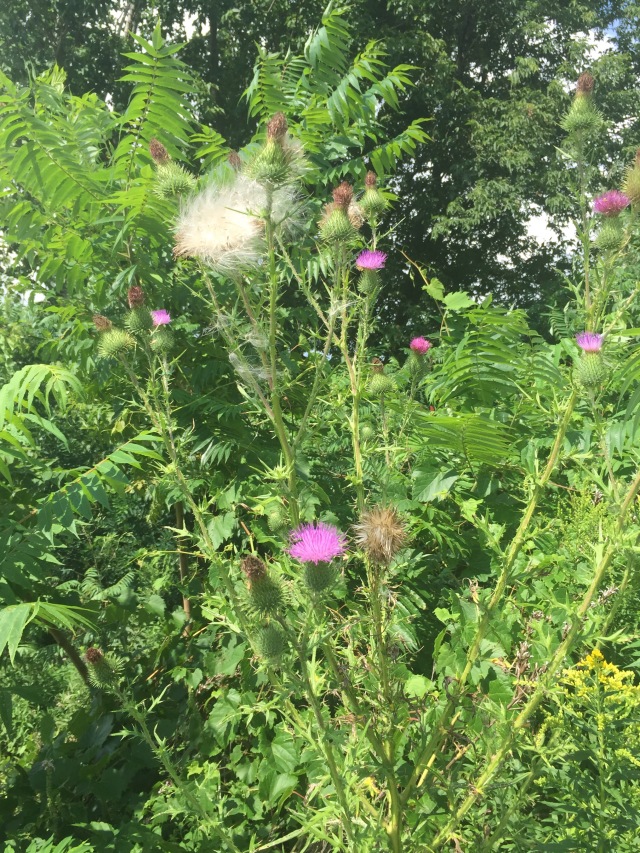 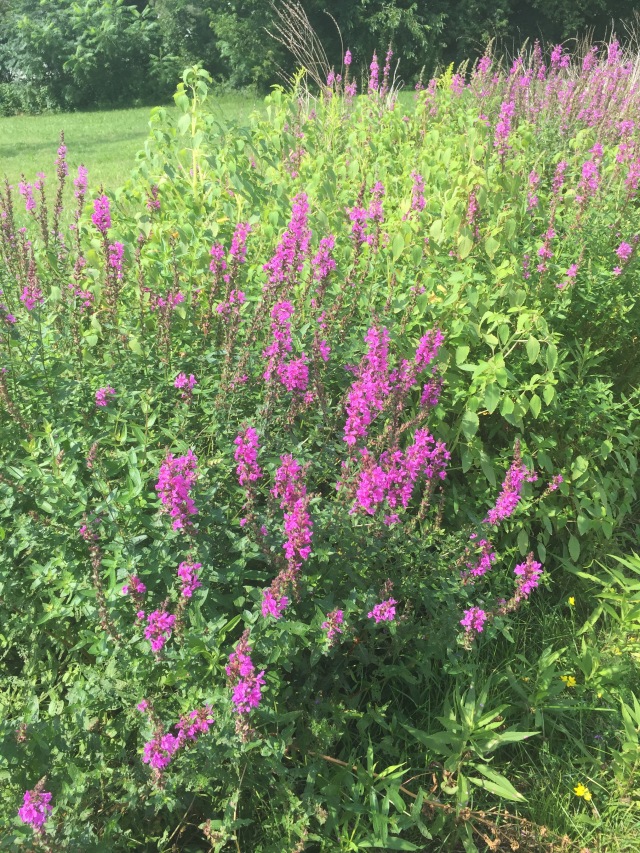 These are most likely weeds, but I don’t care. Purdy.

So, anyhow, those are the pictures. I should wrap this up better, but I’m tired and don’t feel like making the effort. #adulting

I hadn’t looked into Prisma because I assumed that I’d have to pay for the app. I was wrong, and now I’m way too interested.  Add some cold Utica Club on a hot night and I’m entertained! 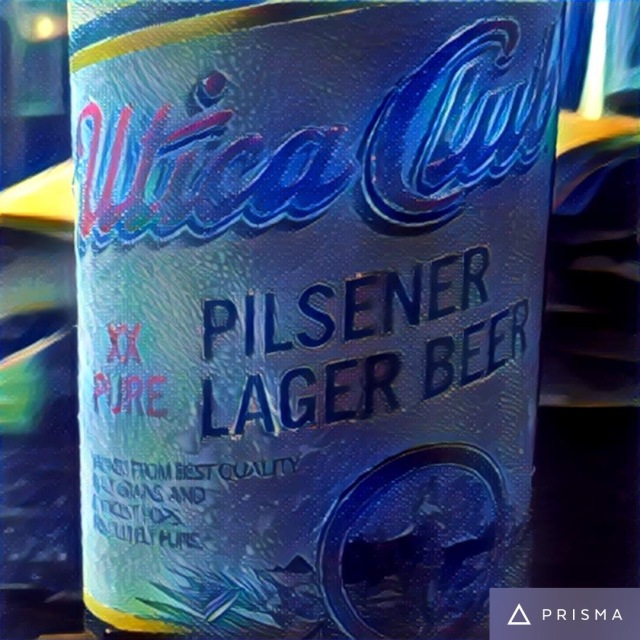 Why so blue, Uncle Charlie?

I think this is a bit much.

In the name of all that’s holy, what kind of mushrooms are in that app???

Ice from the pond taken in the dead of central New York winter becomes ice cream in the summer. I do love rural New York.

(And, yes, this is the real Litchfield- much lovlier than portrayed in Orange is the New Black!)

It’s been a bit hot lately.

And you know this is the truth. 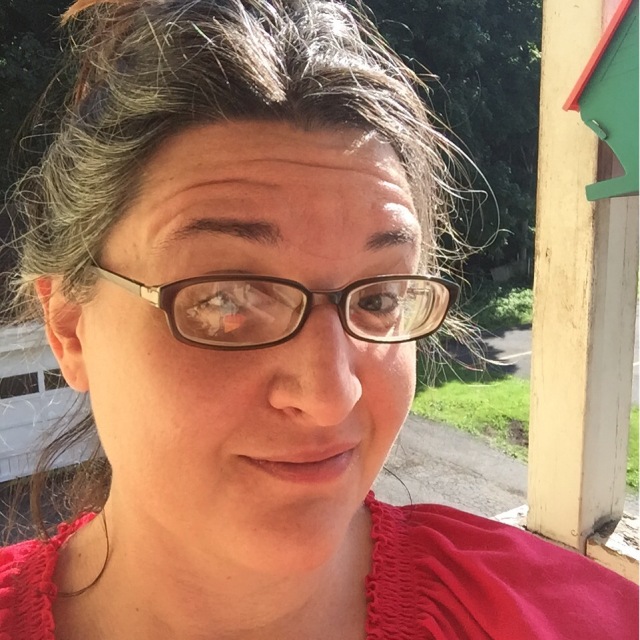 And Then There’s That

And Then There’s That

And Then There's That…
Create a free website or blog at WordPress.com.